The history of surfing - a gift from polynesia to the world

Information about the history of surfing 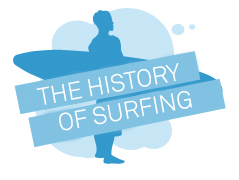 A gift from Polynesia to the world : ” Sometimes 20-30 men go with the swell of the waves of the sea , lie flat on an oval piece of wood the size and width of their feet leave it directly and use their arms to the plank control . Wait until the surf is at its highest , and paddle all to rustle together with the arms , to stay on the top of the waves and with astonishing speed toward the beach ( … ) “

The beginning of surfing – Hawaiian culture

“Sometimes I see 20 to 30 men who lay themselves flat on a piece of wood, use their arms to control the direction they are heading and start paddling for a wave. Once on the peak of the wave, they start speeding down towards the beach (…)” That’s how Lieutenant James King, the commander of the discovery, once described the way the Hawaiians were surfing in 1779.
At this time, surfing was an essential part of the Hawaiian culture. The chiefs demonstrated their surfing skills and the rank of each individual was defined by the skills and knowledge shown on the ocean. Anthropologists cannot exactly date the beginning of surfing in the Polynesian culture; however it can be assumed that around 2000 B.C. people began to move from Asia to the Eastern Pacific Ocean. In the 4th century B.C. the first Polynesians arrived in Hawaii . The new inhabitants to the island not only brought in a new culture, but most of all the tradition of surfing!

When Captain Cook arrived in Hawaii, surfing had already become an essential part of island life. The people invented many rituals which, for example, were associated with christening surfboards or increasing the swell of the ocean. The community of Hawaii was strictly divided in two social classes which had an enormous impact on surfing. Only the chiefs were allowed to surf on the best beach and reef breaks. Everyone else had to surf on the remaining spots. At this time there were three different Hawaiian board types:
1. The Olo, with a length of up to 24 ft., which was thicker in the middle of the board than at the rails
2. The Kiko’o, with a length of 18 ft., which was slightly thinner and therefore good for speed, but not for control
3. The Alaia, which was used by the chiefs only. It measured 8 ft. and was quite thin and wider at the nose of the board.
When Cook reached the island in 1778, surfing was at its peak. But with the European influx into the island, surfing experienced an enormous decline which lasted around 150 years. After Cook published his findings, the island became a destination for those who were looking for adventure . The Hawaiian culture suffered under the different influences that were brought to the island by the various communities and people, and so did the culture of surfing. The native people became more hard working and adopted monotheism. Their culture was not the only thing that died out quickly; so did the Hawaiians themselves. Many diseases, alcohol and other drug abuses made the population shrink to just 40.000 people in 1896 when it was 600.000 in 1779. Still – surfing survived and thank god it did!

The beginning of commercialization

When Hawaii officially became the 51st state of the United States, more and more people travelled to the island. One of them was Jack London, who learned how to surf from journalist Alexander Ford in 1907, through whom he got to know George Freeth who was at this time the most popular and celebrated Waikiki Beach Boy. All three of them loved to surf and called surfing “The sport of the kings”. London wrote in the very same year “A royal sport: Surfing in Waikiki” and founded the “Hawaiian Outrigger Canoe Club”. This club was designed to retain the Hawaiian culture of surfing as well as offering board rental and surf courses. By 1915 there were already 1200 members in the Club. That year the world got to know Duke Paoa Kahanamoku, who happened to be the world champion at 100m freestyle and above all one of the best surfers of Hawaii. As a famous actor, he used his public appearances to make surfing more popular. Whilst on a surfing trip in Australia, he spontaneously shaped a board out of pine trees which he found near Manly Beach and formed the foundation stone for surfing Down Under.
The “Pacific Coast Surf Riding Championship” was the first competition set up by Tom Blake- the inventor of fins – in Corona del Mar in 1928. The event was run for many years with the best surfers worldwide until the beginning of the Second World War saw an end to it. However there were enough people who weren’t willing to give up the feeling of freedom when surfing. Three of them were Woodbridge Parker, Rabbit Kekai and John Kelly who significantly shaped the big wave spot of Makaha. They invented faster and lighter boards throughout the 30s, 40s and 50s.

The era of modern surfing

After 1946 boards were no longer made out of wood but foam. Bob Simmons shaped foam boards which contained rails made from balsa wood and a deck of ply wood. Shortly afterwards, Pete Peterson created a surfboard made of fibreglass which weighed only 12 kg. Fiberglass was invented during the Second World War and Hobie Alter and Gordon Clark were the first to shape boards which were made out of foam and fibreglass and therefore brought a revolution to the surfing market. Progress on surfboards themselves wasn’t the only advance, as people were working on body protection in cold water conditions as well. At the beginning of the 50s, Jack O´Neil invented the first wetsuit. In 1953 the first picture was published in a newspaper, which spread throughout the world, and showed Woody Brown and two others surfing a giant wave in Makaha. At this time, surfing was booming in California and convinced many people to travel to Hawaii.

Two of them were Fred van Dyke and Peter Cole who shaped the era of big wave surfing along with Edie Aikau and Buffalo Keaulana. At this time, surfing became a fully accepted sport and conquered Hollywood as the “Sport of the Hawaiian Kings”. Next to become popular was the clothing – from now on everyone was wearing board shorts and was listening to the songs of the Beach Boys. In 1966 the first short board was invented by Nat Young and measured 9´4´´, which made surfing even more popular! Yes, you may be confused – Usually the short board measures up to 6´11´´ – Nat Young was just the first to invent a board which was shorter than the others. If you want to find out more about the different board types: Click here
Now dozens of people were surfing in places where years before only a few people were allowed. Surfboards were made out of plastic, became mass produced and got shorter and shorter as well as moving away from the old Hawaiian tradition. Today you will find a good dozen different surf magazines, videos and websites that talk about this unique sport. Surfing has conquered the globe!
Nevertheless; surfing is about fun and the connection with nature. We believe that surfing is a true gift from the Polynesians and we thank them for it.